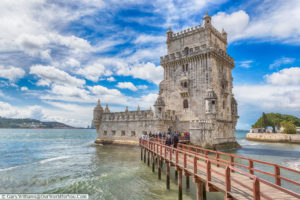 When you gaze out at the Tagus River, tile-roofed houses climbing the hills behind you, you are looking at the port where Portugal’s empire began. Here the kings of the newly independent nation launched an age of exploration—and then poured the profits of their new trade routes and colonies into their capital. Do you see the square tower rising from the water? Belém (the name comes from Bethlehem) Tower, built in the 16th century to guard the port, has housed cannons, prisoners and royalty over the centuries; its ornamented façade might strike you as unusual for a fortress, but that is typical of Lisbon—even fortresses have beautiful ornamentation. Another landmark nearby, the 20th-century Monument to the Discoveries, commemorates these voyagers and their founding patron, Prince Henry the Navigator. Leave the riverfront to embark on your own voyage of discovery: Head inland a short distance to the Jerónimos Monastery, which will have you reaching for your camera. A masterpiece of Manueline architecture—the Portuguese late-Gothic style is named for King Manuel I—erected during the 16th century and decorated with sculptures and elaborate scrollwork, Jerónimos Monastery is another shining example of Portugal’s golden era.

Note: Please note that we do not visit the cloisters at Jerónimos Monastery.

Not all landmarks are architectural, however. Take a break and enjoy one of the city’s iconic pastries, the cream custard tart known as pasteis de nata, at Pasteis de Belém, which has been baking these yummy treats since 1837, before experiencing the rest of your panoramic motorcoach tour through the Rossio—the busiest square in Lisbon.

Your local guide will make suggestions for lunch. You can choose to remain downtown and explore on your own or return to the hotel. Shuttles are available to take you to and from the hotel this afternoon, which is yours to spend as you please. 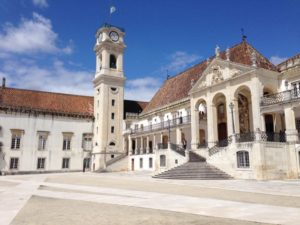 Drive through scenic cork forests and verdant fields en route to Coimbra, Portugal’s third-largest city and the birthplace of six of the country’s kings. You’ll stop at a local family-run restaurant for a traditional Portuguese lunch, starting with Portugal’s iconic soup, caldo verde. Later, see a little of the town itself, which boasts Moorish and Roman architectural remnants and is home to one of the oldest universities in Europe, the University of Coimbra, whose historic buildings crowd the hill above the Mondego River. A one-time royal palace, the university enjoyed the kings’ patronage for centuries, and one king, João V, endowed it with a lavish baroque jewel of a library, the Joanina. Housing more than 300,000 books, including some from the 12th century, it is one of the most beautiful libraries in the world. As a visitor, you and your small group will be admitted into rooms with exquisitely carved and lacquered shelving, splendid ceiling frescoes and ornately gilded coats of arms. These library rooms are simply astonishing.

Then you’ll continue your journey to the heart of Porto, where you will board your ship. Unpack, check out the ship’s amenities and prepare to take in some scenic delights as you cruise away from Porto. Five famous bridges link Porto to Vila Nova da Gaia, including the graceful iron arches of Dom Luis I, and you’ll sail under all of them as you enter the mouth of the Douro and drift past Porto on your way to some of the loveliest scenery Portugal has to offer. 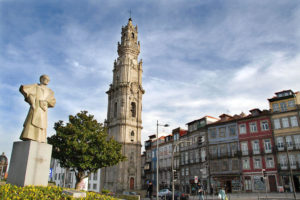 Of course it is the longtime hub of the Port wine trade, but Porto is also much more. Take in the UNESCO-designated, 19th-century Stock Exchange Palace, seeing its famous Moorish Revival–style Arab Room, during your panoramic tour. Get a feel for this vibrant town, which is simultaneously profoundly urban and moodily romantic. Colorful multistory townhouses sheathe the hills that climb precipitously from the Douro estuary, medieval alleys snake through UNESCO-designated neighborhoods enclosed by 14th-century walls—which were erected on Roman foundations—and baroque church towers crown the hilltops. The Clérigos Tower is an unmistakable landmark, visible from almost anywhere in the Old Town—in fact, at one time sailors used it as a guide to navigate their way through the estuary. Visit Porto’s austere hilltop cathedral before driving down to the Ribeira. 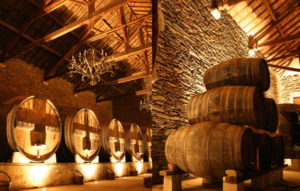 The Douro Valley is the oldest demarcated wine-growing district in Europe. Why? What makes Port the wine it is? Learn about the region’s unique geology and winemaking history—Romans planted vines in this region 2,000 years ago—at the Douro Museum. Exhibits laid out in buildings that were once home to Port winemaker Real Companhia Velha let you see how the process of making Port evolved over the centuries: You’ll find the tools of the trade and even a rabelo (a boat that carried wine from the vineyards to Porto) on display. An interactive map shows where the quintas are and how the region developed; and by sniffing vials of concentrated fragrance, you can learn to identify the many aromas that a good Port exhibits. It’s fun and informative—plus you can sample some regional Douro wine.

Next, travel up winding roads with spectacular views—and breath-stealing drop-offs—to the hilltop winery Quinta da Avessada. Built a century ago, this quinta produces delicious Moscatels, a wine that is very popular in Portugal; in fact, it’s so popular that most of it is consumed within the country—only about 10 percent of it is exported. Luis Barros, who was determined to revive both his family vineyard and his village when he took over the management of Quinta de Avessada a few years ago, is eager to welcome visitors and help them learn how the sweet, floral Muscat grapes are grown in this region’s extreme climate. 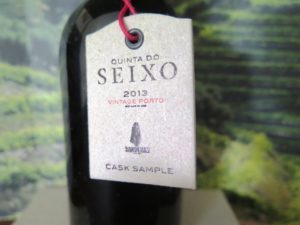 As you journey through the hills to Quinta do Seixo, a prestigious Port wine estate, you will see a unique landscape that has been shaped by wine growers for two millennia. The stone terraces curving around the steep slopes hold soil that is largely the creation of human intervention: People have laboriously broken up the native silver schist stone over the centuries and turned it into usable sandy earth; it’s called “anthroposoil.” The process of producing Port wine is a fascinating blend of tradition and modernity; the steepness of the slopes requires that grape vines be tended almost entirely by hand, but the wine itself is made using the most modern techniques. You’ll tour the state-of-the-art facility and sample some exceptional Ports in a tasting room whose wall of windows looks out over spectacular views of the Douro Valley.

Vineyard hike and wine tasting at a local quinta 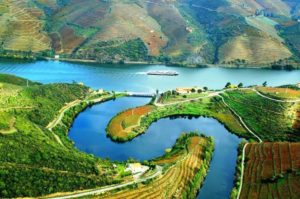 Although many Port wine estates are owned by international corporations nowadays, the tradition of the family-owned estate remains strong. Start this expedition in pretty Pinhão, heading up into the hills to a family-owned quinta, where you can get a firsthand look at how the vineyards are tended and grapes harvested. Although some 80 varieties of grapes are approved for the creation of Port, six grape varieties dominate. Discover which ones are grown here and learn why. 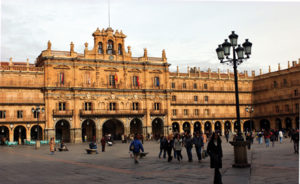 Called the “Golden City” for its tawny sandstone buildings, Salamanca boasts a dozen beautiful and historic churches, including two cathedrals: the new one, built in the early 16th century, and the Old Cathedral, which dates to the 12th century and can only be entered from the New Cathedral. Walk with your guide through Plaza Mayor, lined with wonderful baroque buildings, to the university, which was founded by Alfonso IX in 1218. The ornate plateresque façade is stunning, and the interior rooms you see are equally beautiful. Salamanca’s food hall is one of Spain’s best, as you will discover when you sample chorizos, cheese, olive oil and ham with your guide’s assistance. You have time to browse through the shops on Rua Mayor and enjoy a tapas lunch on your own (your guide can recommend some great places to dine). 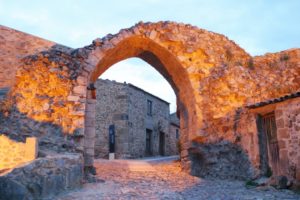 Ride through wonderfully scenic countryside—the region is noted for its honey, which derives its flavor from the fields of wild lavender and the almond groves you’ll pass—to Castelo Rodrigo, the name of both a castle and the village it shelters. The castle ruins stand high atop Marofa Mountain, telling the tale of border strife and Portugal’s struggle for independence in a single structure. Construction on the citadel began in 1209 under the auspices of the king of Leon, but it became part of Portugal within a century—though its local lords sided with Spanish rulers from time to time over the next four centuries. That’s why the palace adjoining the castle lies in ruins: Outraged citizens destroyed it after its lord sided with Castile. Take in the amazing view from the ancient stone walls, then step down through the tiny cobbled lanes of the village, passing the old pillory, the Manueline church, and the town’s market square. It’s not all history, of course. You’ll also get to sample delicious local treats, such as honey, almonds, olive oil and cheeses, and a newly restored tea-house invites you to relax over a cup of tea or a cool drink.

Archaeological Park of the Côa Valley 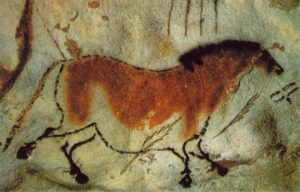 Ready for an expedition worthy of Indiana Jones? Today’s your chance. In the 1990s, scouting for a proposed dam project on the Côa River revealed an astonishing collection of prehistoric carvings, among them horses, deer and aurochs that span eons. The oldest images etched into the schist walls around the river date to approximately 22,000 to 20,000 BC, with younger carvings ranging from the Epipaleolithic, Neolithic and Bronze ages to the 17th century—images that represent human interaction with the natural world for more than 30,000 years. Your visit starts at the Côa Museum, where you can see both reproduction and original rock art and learn about the amazing area. Then you can go out with your knowledgeable guide into the valley to see these sites for yourself. It will be an illuminating adventure. Note: Exploring these sites will require sturdy hiking footwear and considerable physical fitness: You’ll take a four-wheel drive down dirt roads and hike into rocky and hard-to-access locations.

“Portugal was born here.” So the sign on the city wall proclaims. Guimarães was home to the first king of Portugal, Afonso I, who managed to win his kingdom’s independence in the 12th century from neighboring suzerains. The wonderfully well-preserved Old Town, with its unique architecture (houses here combine granite with half-timbering) and charming little plazas, is a UNESCO World Heritage Site; overlooking it is the grand castle that appears on Portugal’s coat of arms. Rove with your guide from the castle toward the beautiful main square, the Largo da Oliveira, and to the splendid Monastery and Church of Our Lady of Oliveira and the 14th-century Gothic Padrão do Salado. But remember that despite these historic beauties, Guimarães has the youngest population of any city in Europe, so the pedestrian area is full of lively and fun cafés and shops.

Prince Henry the Navigator was born in this historic waterfront neighborhood in 1394, and, more than 600 years later, the building is still standing: It became Porto’s first customs house, which seems appropriate, considering that Prince Henry began Portugal’s international trade. Stroll with your local guide through the oldest part of the city—check out some of the Roman ruins excavated here—simply breathing in the atmosphere. It may be a UNESCO World Heritage Site, but it’s no museum: People hang their laundry from upper floors of brightly painted houses, dogs mosey down the alleys, cafés nestle under 500-year-old arches, and traditional rabelos flat-keeled sailboats that once carried barrels of Port from the vineyards to the Port cellars) bob at the quay. As lively as it is picturesque, Ribeira is indeed the soul of Porto.