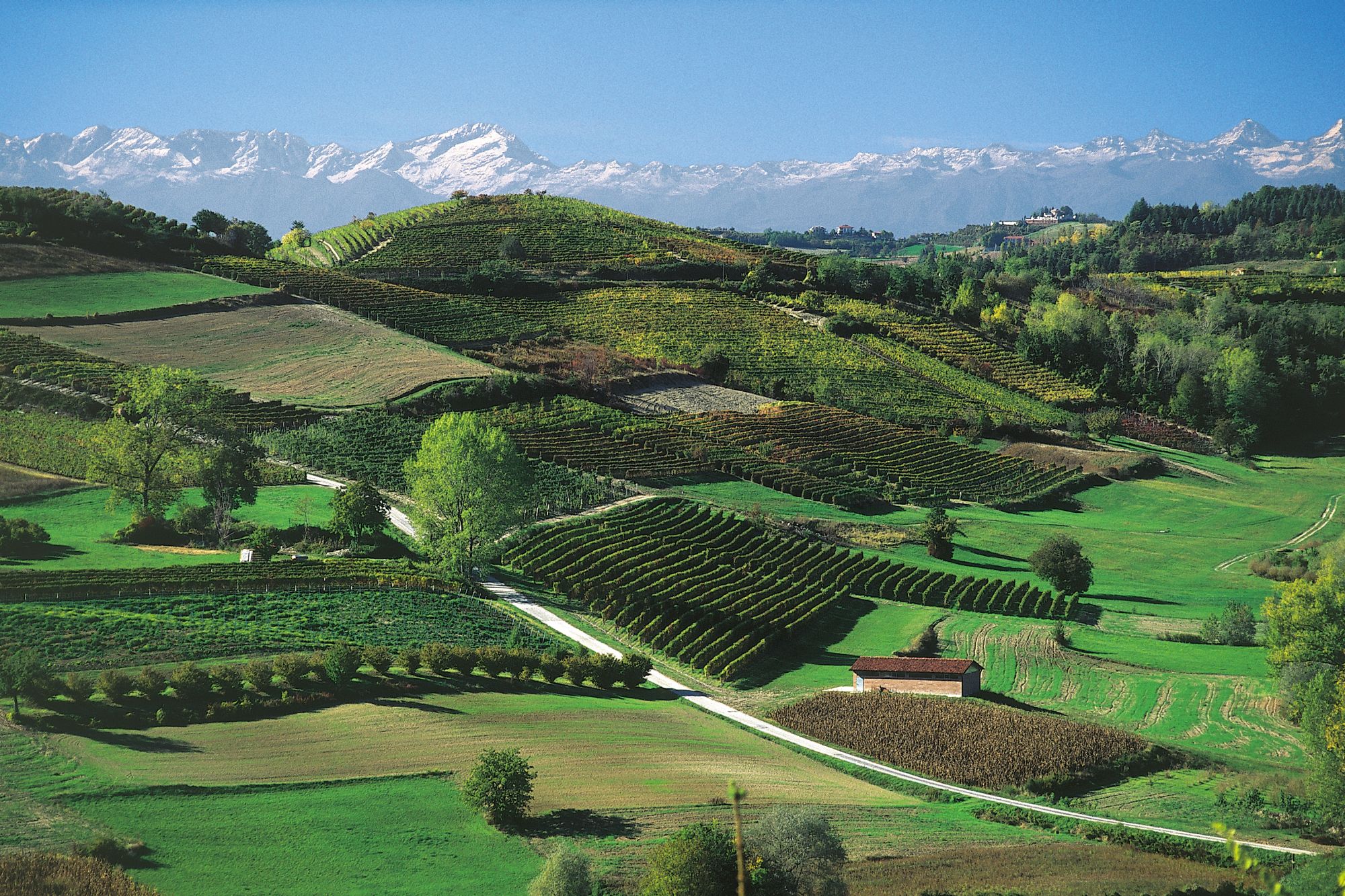 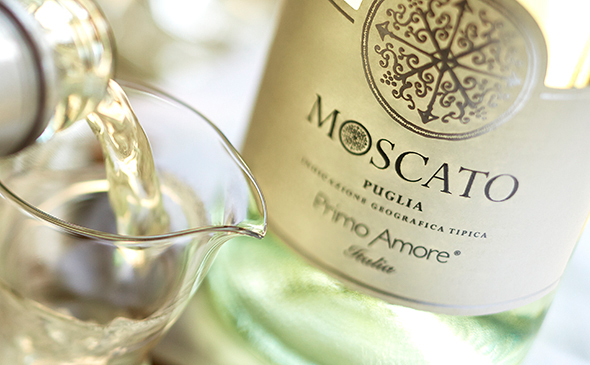 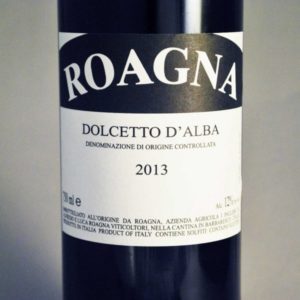 the northwestern corner of Italy. The best-known wines from the region include Barolo and Barbaresco. They are made from the Nebbiolo grape. These wines are ideal for storage and a well-aged Barolo for instance may leave a feeling of drinking velvet because the tannins are polished and integrated more and more into the wine. As the wine matures the colour becomes more brownish and rust-red.
Other popular grapes used for red wine production are Barbera and Dolcetto. Wine made from the Barbera grape is often fruity and delicate with less tannin than wine made from the Nebbiolo grape. Dolcetto on the other side, is not as

the name indicates sweet, Dolcetto means just a little bit sweet. (dolce is Italian for sweet). The grape gives fresh and dry red wines with some tannin. The wines made from the Dolcetto grape should be consumed young.
The sparkling wine Asti spumante is made from the Moscato grape. The majority of the area’s winemaking take places in the provinces of Cuneo, Asti and Alessandria. The Brachetto is another variety used for making sweet and sparkling wines.

The Piedmont region is home to 42 Denominazione di origine controllata (DOC) and 17 Denominazione di Origine Controllata e Garantita. The Piedmont produces more DOCG wines by volume than any other Italian wine region with nearly 84% of all the areas wine production falling under a DOCG designation. The area has no Indicazione Geografica Tipica (IGT) classification, in contrast to Tuscany where IGT wines or Super Tuscans make up a significant portion of that 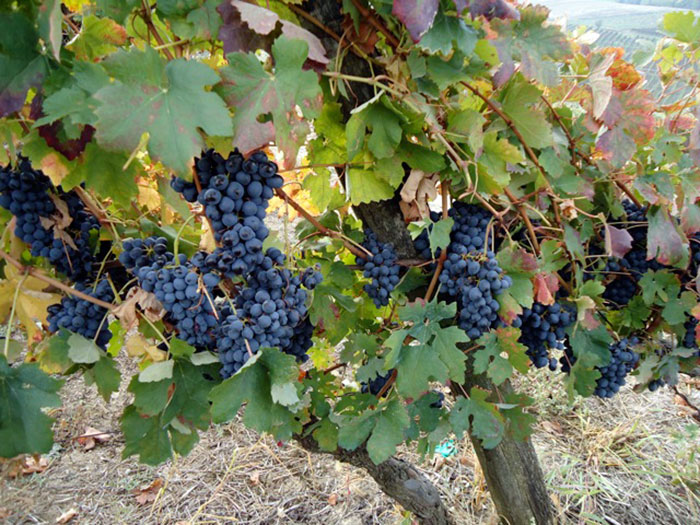 The 17 DOCG wines in Piedmont are: 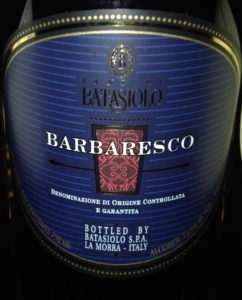 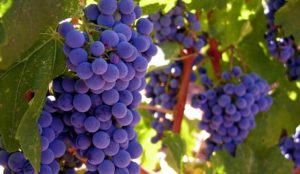 Barbera is the most widely planted grape in the region, but Nebbiolo and Dolcetto account for a significant portion of the area’s red wine production as well.

Moscato is the most prominent white wine with its sparkling and frizzante style wines. Other notable white wines include styles made from the Cortese grape in Gavi as well as blends of Cortese with Arneis and Favorita from Colli Tortonesi and Alto Monferrato. Some varietal style wines are made in the Piedmont region with the name of the grape and town both appearing on the label. Some DOC examples include Barbera d’Alba, Barbera d’Asti, and Dolcetto di Dogliani made entirely from the Barbera and Dolcetto grape respectively. 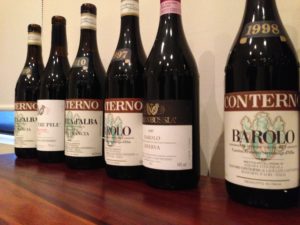 Barolo: in 1980, the wines of the Barolo region became one of the first Italian wines to receive DOCG status. Produced to the southwest of the town of Alba in the hills of the Langhe, Barolo is a big, tannic expression of the Nebbiolo grape. The soil of this area is a composition of clay and marl which helps to lessen the naturally high acidity of Nebbiolo. The Tanaro river flows through the heart of Barolo country and serves as a tempering influence on the region’s summertime heat till harvest time in late October/mid November. A small wine region, extending over 7 miles in length and 5 miles at its widest point, Barolo produces about 500,000 cases of wine annually. Nearly 87% of the zone productions comes from vineyards in five communities: Barolo, Castiglione Falletto, La Morra, Monforte d’Alba, Serralunga d’Alba. 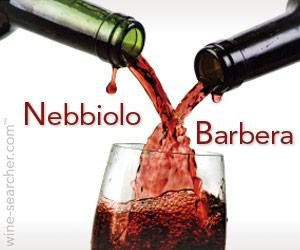 Wines from the Central Valley of La Morra and Barolo tend to be very perfumed and velvety with less tannins than other Barolos. The soil of the Central Valley itself is more clay based with increased levels of magnesium oxide and manganese. The wines from the Serralunga Valley are more full bodied and tannic and require aging of 12–15 years before they hit their peak. The soil of the Serralunga is heavy in sand, iron, limestone, phosphorus and potassium.

Barbaresco: produced from the same grape as Barolo and less than 10 miles apart, there are a lot of similarities that Barbaresco has with its neighboring wines but the slight maritime influence of the Tanaro river helps fashion distinctly different wines.

Generally less tannic, Barbaresco tend to be more elegant and approachable in their youth. The Barbaresco DOCG regulation stipulates wines with minimum alcohol content of 12.5% and 2 years minimum aging in the winery for standard labels and 4 years minimum for riservas wines. Being an even smaller zone then Barolo, producers in the region produce a little more than 200,000 cases annually. The majority of Barbaresco production takes place in 3 communities: Barbaresco, Treiso, Neive.

And, since the 1980s, there has been a growing number of experimental plantings with the international varieties of Cabernet Sauvignon, Chardonnay, Merlot, Pinot noir, Sauvignon blanc and Syrah. 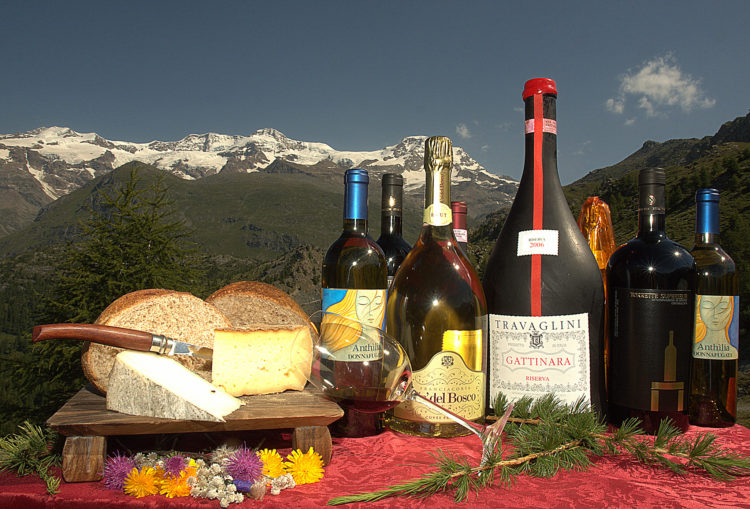