Highlights of the wine regions of Loire Valley Wine Region

The Loire Valley, France is best known as being the home to many important castles. Many of these date from the 15th to 17th centuries when the region was much loved by many of the French Kings and noblemen, who competed to build ever more elaborate and luxurious chateaux. The ones not to miss include: Amboise, Chenonceau and Chambord.

Towns, cathedrals and villages
No trip would be complete without enjoying visits to some of the fascinating historical towns and villages and a cathedral or 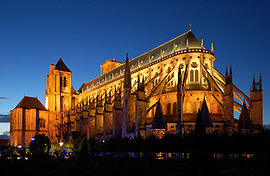 two – the cathedrals at Bourges and Chartres are both world famous and a “must see”. 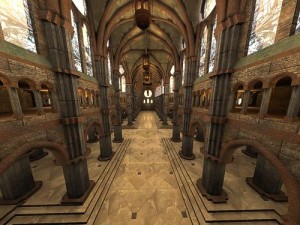 There are also several towns that have castles, but aren’t necessarily best known for their castles – Gien and Baugé.

A couple of the most important towns in the Loire valley include Tours and Loches .  Meanwhile if you are looking for something a bit less ‘monumental’ than great castles and cathedrals, the region also includes several villages that have been awarded the prestigious ‘one of the most beautiful villages of France’ classification, and each has a great deal to enjoy as you amble around enjoying the local architecture and style –Saint Benoit du Sault, Montresor and Lavardin amongst others. 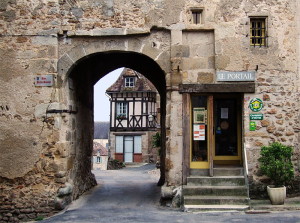 Countryside and rivers
Take the time also to enjoy the countryside and the scenery along the Loire river and its tributaries (the region along the river is now a UNESCO listed heritage site), perhaps on foot, cycle or horse back. The main tributaries include the rivers Cher, Indre and Vienne and each of these has its own charm and characteristics. 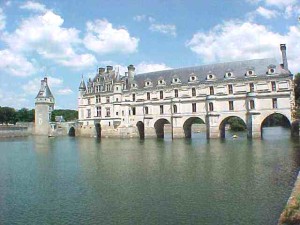 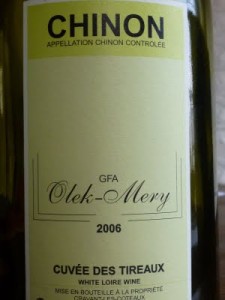 The Loire Valley wine region includes the French wine regions situated along the Loire River from the Muscadet region near the city of Nantes on the Atlantic coast to the region of Sancerre and Pouilly-Fumé just southeast of the city of Orléans in north central France. In between are the regions of Anjou, Saumur, Bourgueil, Chinon, and Vouvray. The Loire Valley itself follows the river through the Loire province to the river’s origins in the Cévennes but the majority of the wine production takes place in the regions noted above. The area includes 87 appellations under the Appellation d’origine contrôlée (AOC), Vin Délimité de Qualité Superieure (VDQS) and Vin de pays systems. While the majority of production is white wine from the Chenin blanc, Sauvignon blanc and Melon de Bourgogne grapes, there are red wines made (especially around the Chinon region) from Cabernet franc. In addition to still wines, rosé, sparkling and dessert wines are also produced. With Crémant production throughout the Loire, it is the second largest sparkling wine producer in France after Champagne. Among these different wine styles, Loire wines tend to exhibit characteristic fruitiness with fresh, crisp flavors-especially in their youth.The Loire Valley has a long history of winemaking dating back to the 1st century. In the High Middle Ages, the wines of the Loire Valley were the most esteemed wines in England and France, even more prized than those from Bordeaux.

The Loire river has a significant effect on the mesoclimate of the region, adding the necessary extra few degrees of temperature that allows grapes to grow when the areas to the north and south of the Loire Valley have shown to be unfavorable to viticulture. In addition to finding vineyards along the Loire, several of the river’s tributaries are also well planted-including the Allier, Cher, Indre, Loir, Sèvre Nantaise and Vienne Rivers.The area has a continental climate that is influenced heavily by the Loire River and the Atlantic ocean at the western edge of the region. The climate can be very cool with spring time frost being a potential hazard for the vines. During the harvest months rain can cause the grapes to be harvested under ripe but can also aid in the development of Botrytis cinerea for the region’s dessert wines. 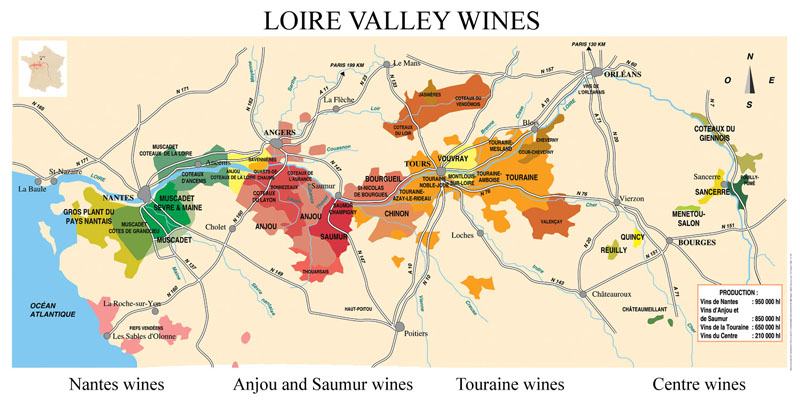 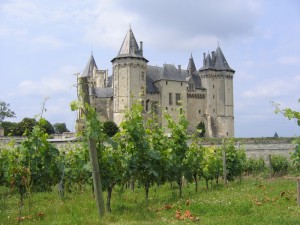 Sauvignon blanc and Pinot noir are the principal grapes of this region that is centered around the appellation of Sancerre and Pouilly-Fumé. The two towns of Sancerre and Pouilly-sur-Loire sit on opposite sides of the Loire river with Sancerre being about 10 miles to the northwest of Pouilly. The Fumé is said to come from the silex flint interspersed with the limestone in the area that can give a smoky gunflint note to the wine. Another possibility for the name is the early morning fog created by the Loire river that can blanket the vineyards. Wines labeled with just Pouilly or Pouilly-sur-Loire are often made from the Chasselas grape.

Unlike many areas of France, the Sancerre region is heavily mechanized with the use of mechanical harvesting rather than hand pickers. One of the best known producers in the region is Didier Dageneau who, until his tragic death in 2008, was an influential voice in the area advocating the reduction of yields and the use of organic viticulture. Pouilly-Fumé only produces white wines while Sancerre produces red, white and rosé wines. The white Sauvignon blanc based wines from this region has characteristic gooseberry and grapefruit flavors with the Pouilly-Fumé version typically being more full bodied and rich in texture. The red Pinot noir wines are very light in both body and color that are not very similar to other French expression of the grape like those in Burgundy.