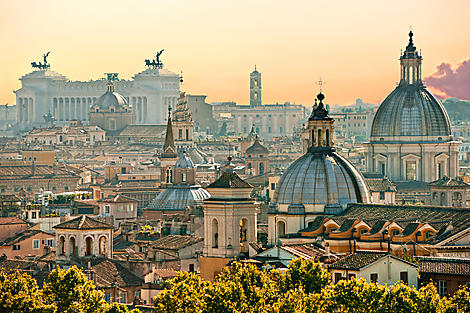 Built on an Etruscan site, between the Tyrrhenian sea and the Monti della Tolfa, Civitavecchia respires the dolce vita. This very modern and easy going town combines art and history with panache. You can also visit superb historical sites like Fort Michelangelo or the Cathedral of Saint Francis of Assisi. Just 80 kilometres from Rome, the town is a beautiful first step to the Italian capital. 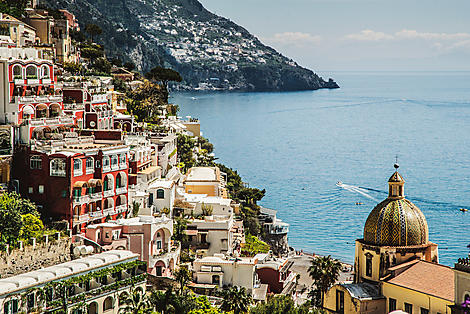 Perched on the cliffs that plunge into the deep blue of the Mediterranean, Sorrento is ideally located on a peninsula between the Gulf of Naples and the Amalfi Coast. Its peaceful alleyways, villas, hotels and gentle way of lifehave been charming visitors and the greatest authors since the 19th century, from Byron and Tolstoy to Dickens and Goethe. As you enjoy a walk in this romantic atmosphere, you will discover the mediaeval cloister of Saint-Francis Church and a magnificent panorama over the Gulf of Naples and Mount Vesuvius. Sorrento is surrounded by groves of oranges and lemons, flavours that can be enjoyed in particular in the form of a sweet liqueur, limoncello. 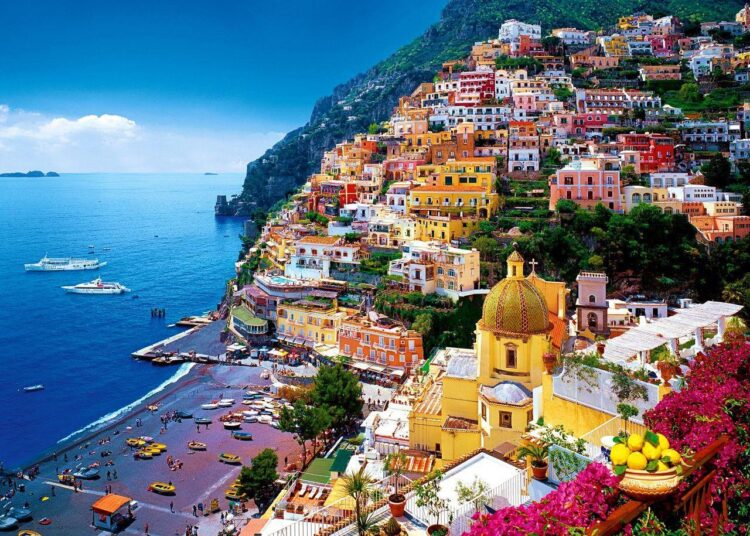 The little town of Campania gives its name to the region containing the magnificent, UNESCO World Heritage listed, Amalfi coast. And for good reason. Located at the foot of Mount Cerreto, against a rock face of a gorge that opens onto the sea, Amalfi’s absolutely splendid natural scenery alone is enough to feast your eyes on before making for the medieval streets to explore some of its history. The mix of cultural influences from the Mediterranean Rim is omnipresent here. 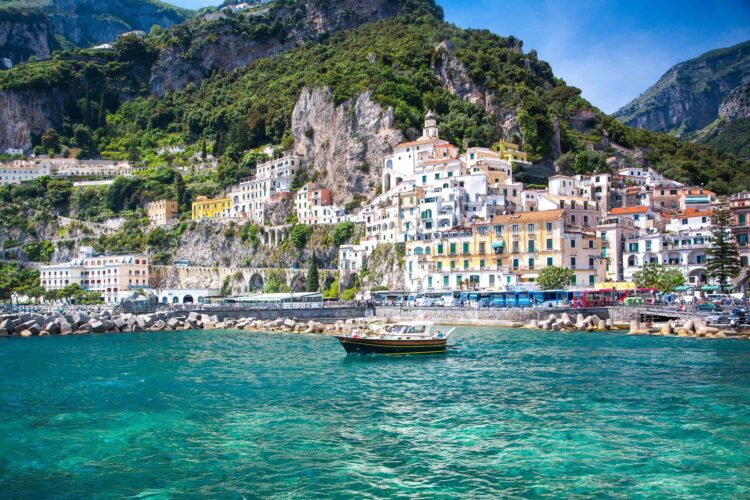 Positano, emblematic village on the Amalfi Coast, a UNESCO World Heritage Site, will fascinate you with its exceptional natural setting. Tumbling down the cliffs overlooking the Tyrolean Sea, the picturesque and colourful colour palette of its buildings will enchant your eyes. This village, emblematic of the dolce vita, will delight you with its lively terraces, its designer boutiques and its direct access to the sea. The hike along the Path of the Gods offers a magnificent panoramic view over the sea and the islands, including the Sirenusas, which are believed to have inspired Homerto write the Odyssey. It is just as difficult for us now as it was for Ulysses in the past to resist the charms of this region.

Like Ulysses during his Odyssey, you will have the opportunity to admire the Stromboli, the capricious volcano that looms over the Aeolian Islands. Its activity, uninterrupted for thousands of years, has earned it the nickname the “Lighthouse of the Mediterranean”. 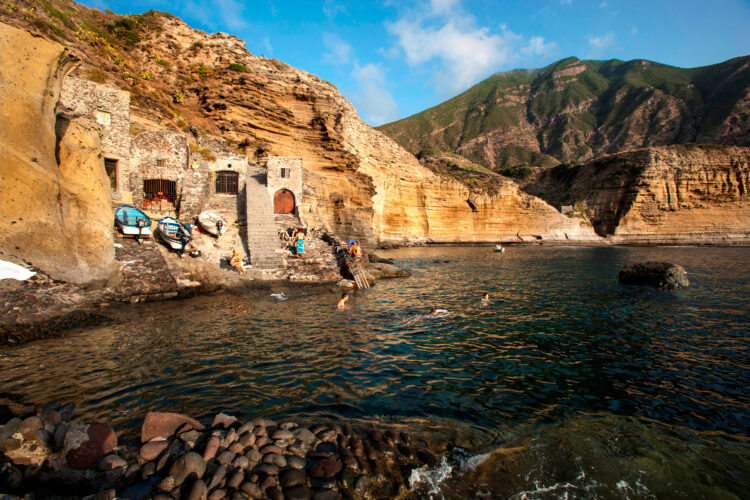 Of the seven Aeolian islands, this is the largest and the most populated. Lying off the north coast of Sicily, in the Tyrrhenian sea, Lipari is one of UNESCO’s marvellous World Heritage sites. Its lava stone quarries and obsidian flow of Rocce Rosse are indications of its volcanic nature. The town, the largest urban area in the whole archipelago, proudly houses its citadeland its castle, both rooted in Antiquity. If you head further into the centre, you’ll be surprised to come across a Norman cathedral, complete with a magnificent baroque façade. 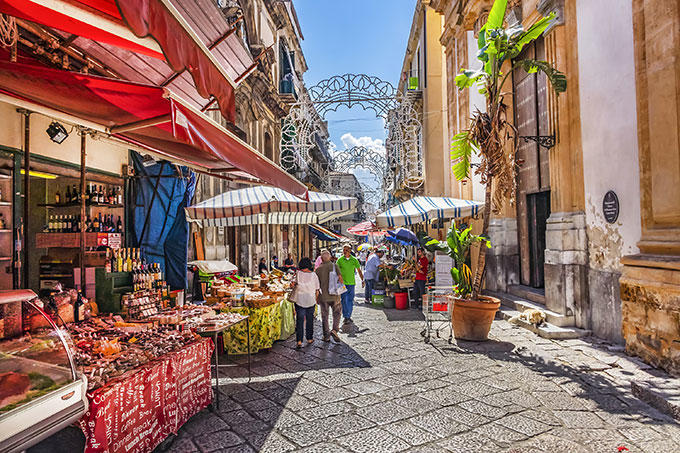 Palermo is the guardian of the Sicilian soul. Many have been attracted to this city, the largest capital of the Italian islands. Phoenicians, Carthaginians, Romans, Byzantines, Arabs, Normans… Palermo is a rich culmination of so many cultural influences as seen in the Moorish designs on the cathedral,and the Byzantine mosaics of the Palatine chapel, which is itself housed within the precincts of the Norman palace. You will fall under the spell of the palaces, baroque splendours that grace the town with their obsolete beauty. It is thrilling to stumble upon one of those fabulous markets, high in colour, and headily picturesque. 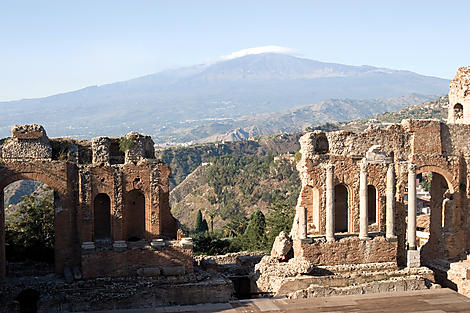 Located on Sicily’s eastern coast, in the province of Messina, the seaside town of Taormina is Sicily’s Saint-Tropez, boasting heritage sites, secluded beaches and luxury shopping. You can visit its medieval centre, suspended 300 metres above sea level, where terraces offer a spectacular view of the Mediterranean Sea. Another vestige from its past are the ruins of the Greco-Roman theatre. This extremely well-preserved site attracts visitors who are fascinated by the natural beauty of the area which overlooks a turquoise bay. 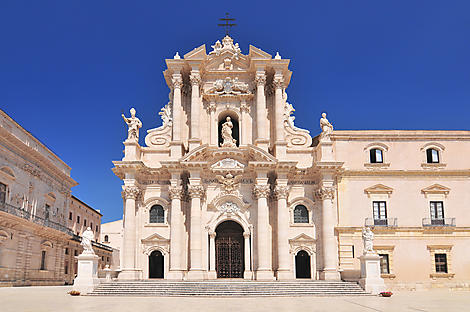 Its undulating rocky coastline, the endless sandy beaches, the menacing form of Mount Etna which surveys its island like a patriarch, the flowery gardens on the hillside… Sicily lays out its varied landscapes like a shopkeeper displays his wares. Described by Cicero as “the most beautiful city in the world”, Syracuse was one of the most prestigious cities in Sicily and at her height was even a rival for Athens. A central city of Ancient Greece, it was home to a succession of civilisations, each of which has left their mark. The blend of Arabic, Roman, Norman, Byzantine and Spanish cultures makes Syracuse a town that is extraordinarily rich in fragrances, colours and flavours. 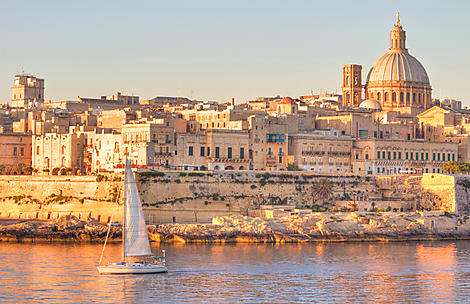 The whole of the Maltese capital Valletta is UNESCO World Heritage listed and occupies a peninsula in the north-east of the island. From the fountain of Tritons to Saint-Elme fort, there are as many majestic streets as there are narrow staircase vennels to explore. The painted loggia and carved corbels on the tall houses will accompany you in your explorations, and you’ll rarely be bothered by traffic. You can visit the Grandmasters palace decorated with coats of arms and frescoes. Saint-John’s cathedral and the ramparts which have guarded the city since the 16th century are also among the most emblematic sites of the city. Arranged in terraces, the Barrakka Gardens will punctuate your promenade with a green and floral experience.

Let’s take your next trip together!